The big day is November 3rd, tomorrow. Last night all the local channels were packed with campaign commercials, trying to get their last word in this fight. (In Kosov@, candidates are limited to one month of campaigning, the 1st of the month prior to the elections to the 1st of the election month.) In Mitrovica, PDK, the current ruling party, had a party in the center of town with an inflatable clown, foosball table, and a DJ. I am not sure why they were targeting children, but it was all cut short anyway when the electricity went out.

Now the party is really over. Today marks the first day, television stations will stop showing speeches of political promises. Journalists will stop babbling on about what might happen and the general public can focus back on their little-changed lives.

This round of Kosovar elections is only at the municipal level–mayors and the equivalent of city councilmen. Though it is only these positions far down on the political power spectrum, this election has been riling up it’s fair share of protests and arguments.

Some wonder whether or not this will be a fair election, like the past has yet to provide for. How votes will be bought through patronage or fear, and how many will simply be stolen? Disillusionment seems very widespread. Even if the election is fair, will anything change? Will those in power lose their grasp? Will any part of life be significantly altered even with a shift in the political status quo? 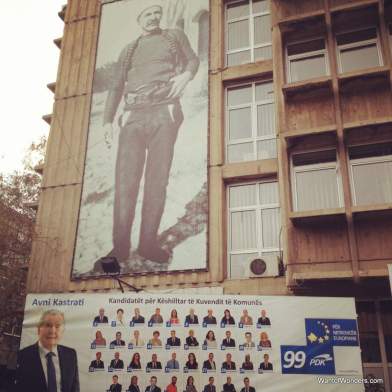 PDK banner in center of Mitrovica

Some have turned their disillusionment into satire. Partia E Fortë is offering an alternative to the political parties that have repeatedly disappointed so much of the public. Their name translates to the Strong Party, while their logo is the Albanian double eagle with Schwarzenegger-esque muscles. The party head is referred to as “Legendary Chairman”, while all other members are deputy chairmen. Their platform, which they call Lorem Ipsum, includes legalizing marijuana, outlawing marriage, selling ad space on state symbols, using stray dogs as public transport, and renaming the country The Strong Republic of Kosovo. In response to the 40% unemployment rate in Kosov@, the Strong Party reasons that the real problem is that 60% of people are still working. Their goal is 100% unemployment.

One elderly and thoroughly fed up Mitrovica resident told me he would vote for the Partia E Fortë if they had a candidate in the city. They are only running in the mayoral race in Pristina. Though no one believes they are serious contenders for mayor of the capital city, some expect them to win seats in the municipal assembly.

The more central issue in the coming election is not whether or not anyone will actually vote for the Strong Party, but rather what the Serbian population will choose to do. For the first time in Kosov@ history, the Serbian government has officially urged the Serbs in Kosov@ to participate in an election called by Pristina government. In the past, the Serbian population has always boycotted elections of the contested independent state of Kosov@ because they believed that would be giving recognition to such an independent state. Some of the population still feels they should boycott elections. They have made this clear with protests, banners, and bombings across the river from us. Candidate and voter intimidation are of huge concern, though there are plenty of international election monitors in the northern part of Kosov@.

We will see what tomorrow brings.

AKR banner in center of Mitrovica